The Rocky Road to story telling

I've not written much lately.

Not because I haven't got any ideas, but because I've got too many.  What should I write next? Should it be the one with the llamas in? Or the 'quiet man in the caravan' story? Or should I finish that vampire novella that's half done and sitting on my desktop like a big accusatory finger wagging at me whenever I start my machine?

It's like...you know when you fancy a bar of chocolate?  You just think 'mmmm, I want some chocolate,' so you go to the shop and you stand in front of the 'chocolate' section and... do you want milk, plain or white? Do you want ordinary chocolate, or chocolate with bits in? Posh chocolate, which you tell yourself you will only eat a little bit of because it's so rich, or cheap chocolate where you know you will scoff the whole bar in seconds? Or would you rather have something covered in chocolate, like peanuts or raisins?  Or even a pack of chocolate biscuits, because they are chocolate and you can also dunk them in your tea?
Too much choice, you see?  I sometimes wish the inside of my brain was like Soviet-era Russia, no choice, one item and you have to queue for a fortnight to get it. If I had to work for ideas I wonder if I would value them more and feel more inclined to work on them - rather than discarding them if they seem to have too many nuts in in and not enough toffee.

And then I have the tendency for my ideas to become like Rocky Road - llamas, plus quiet man in caravan, with a few vampires floating around for good measure. 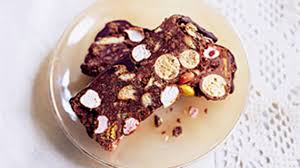 But, whereas nobody ever said 'what that Rocky Road needed was a few less cherries and not quite so many marshmallow pieces', a book CAN have too many elements in it for proper storytelling.  Too much going on and you can't focus on the characters.

I think I'll go and stare at the chocolate section again for a bit. Warning: my next story may contain nuts.

The Cake of Disappointment...

I apologise for the sporadicity of my blogging lately.  I used to be hugely regular, but since I started a job where I frequently work weekends, I have found myself with less oomph on the bloggage front.  And, I suppose, there are only so many pictures of my dogs and cats that I can put up to entertain you with...

So, anyway.  On Tuesday, my book 'Can't Buy Me Love' came out in paperback!
And I duly celebrated by baking the world's worst cake,  I know, I know!  I should have just gone out and bought myself a fabulous cake from a proper shop, preferably one with 'Congratulations' on it in fat icing (I love icing).  I debated buying fourteen cupcakes and icing a letter on each one, so that I could eat them in a 'GIVE ME A C!  GIVE ME AN O!' flamboyant sort of a way.  But I didn't (mainly because I took the dogs on an 8 mile walk and was too lazy to go out to the shops afterwards. Honestly, my feet hurt).  And I'm generally quite good at cakes and I had a big thing of ready made icing in the cupboard that needed using up so... anyway.  I made a cake.

Well.  Quite clearly I have offended the Gods of Baked Goods.  Because that cake was the worst cake I have ever made (and I once mistook wholemeal bread flour for ordinary self raising and made a cake you could have laid as a foundation stone).

It looked all right when it came out of the oven, all puffy and spongey and like it was supposed to. So I left it to cool, whereupon it listed sharply to starboard and sank sideways.  It looked less like a book celebration cake and more like a Titanic memorial sponge. But there's no such thing as bad cake, right?  So I cut it in half (revealing its patchily soggy middle) and filled it with jam and buttercream, spread icing on the top and prepared for a feast. 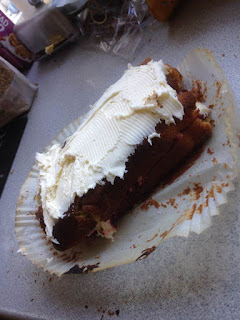 It tasted like it looked.  A slightly-sweetened brick, with overtones of raw egg.

I hold that there are few disappointments quite as...well...disappointing, as food disappointment.  You know, when the icing from your bun sticks to the paper bag, or your eclair topping melts, or that yummy jam that you thought was apricot and spread all over the middle of your victoria sponge turns out to be marmalade?  It was like all that.

It wasn't so bad when it was fresh, but after two days, when the icing went hard, it was almost inedible.  But only almost.  I mean, it was a celebration cake - I had to eat it!

Next time it's straight to the Co Op...
Posted by Jane Lovering at 11:19 No comments: