Writing tip - you don't need to write it all down...

People who don't write - ie, sane and sensible members of the community who don't go around with their pants on their head - assume that writing is an easy task.  You sit down in front of a computer and write words, don't you?  And, when you've written enough words, you stop writing and someone publishes those words.  I mean, what else could possibly be involved?  And, by extension, anyone with a spare half hour and access to a working biro can do it.  In fact, the big surprise is that every single member of the population hasn't written at least half a dozen best sellers - the only possible reason that they haven't must be that they just haven't got round to it yet.  Well, you know what it's like, busy busy, work and the house and then there's the Omnibus edition of the Archers and that bacon won't grill itself, you know.

So, as I am just getting started on my new novel, I thought I may give you an insider's perspective on the writing process.  Well, I say an insider, I actually mean someone who's doing it but might break off at any moment to eat Smarties, wander round the garden or lie with her head under the pillow moaning gently.

Sometimes, I think, as writers we get a bit carried away with our 'mental image' of something. We are so in love with it that we want our readers to 'see' it as clearly as we do in our heads, upon which we are so  carefully balancing our pants.  And sometimes we forget that it really doesn't matter.  We can mention a large country house, belonging to a made-up version of the National Trust, and readers know what that looks like.  They don't need to know that it's Elizabethan, built of Ham stone, contains the equivalent of fourteen acres of wooden floor and that the kitchens were redesigned in the nineteenth century.  We just need to tell them it's a big old house. They've got imaginations, let them do some of the heavy lifting, visualisation-wise.

Summer Holiday - do not disturb, Work In Progress. And flies.

You can tell summer is here - there are flies and cyclists everywhere. I should point out that they do not travel together - there are no cyclists, for example, in my bedroom (and anyone who says differently is a wicked rumour-monger) and few flies have finished the Tour de France.  That I know of, of course, I am prepared to admit that they might have really tiny little bikes or, you know, just fly the route or something, although why they'd bother I don't know.  I suppose the view is nice.  Although, if you're a fly, your idea of a good view might be a pile of meat, in which case some lovely scenes of the Alps aren't going to do much for you. 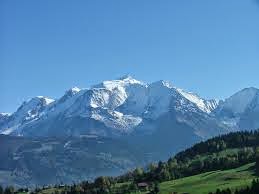 Anyway.  Summer is here.  Or at least, the summer holidays are.  Working in a school might mean early starts, more chasing down corridors than an old style Doctor Who episode, and a quite phenominal amount of photocopying, but it also means a six week holiday without any school-related activity.  But does this mean I shall be lying back in the sun and airing my body on some foreign beach?

Oh come on.  You remember the bit about working in a school, right?  I can just about afford to go outside in my own garden, if I'm careful and don't indulge in luxuries like food. But what it does mean is a six-week stint of putting words down on paper in as uninterrupted a fashion as can be achieved by anyone with a house full of rapidly-ageing children and dogs, who, every five minutes, want to go somewhere.  It's not too bad, I mean the children are of an age where they can wait for their escorted trips into town, although the dogs are of an age where they probably can't wait that long for their outings, but with an Olympic degree of balancing and a heroic amount of coffee, I can usually manage to do some real amounts of writing.

So, this summer, this is what I am proposing:  to finish the novella; to make inroads into the new novel (cautiously entitled Crush); to make notes on a possible project which I haven't mentioned to anyone yet but will do as soon as I decide what it is; and maybe indulge in a bit of light dusting. That should keep me busy.  But please do feel free to nag me, should you see me freewheeling on Facebook or tiddling on Twitter - I need all the help I can get to keep my nose to the grindstone and prevent procrastination.

Which is what this blog post is, so, if you will excuse me, I shall hop off and write some words.  After I've watched these unnecessarily fit young men cycle up a mountain, of course.

Yes, I know I don't have to shout, but I thought you may be so relieved at my safe return that you would like to hang out some bunting?  No?  Not even one bunt?  All right then.  Meanie.  Because, considering what a totally fabbola time I had, you should think yourselves lucky that I came back at all, left to myself I would still be circling the (slightly confusingly laid out) campus like a moist and unlucky mosquito.

Friends!  Old, not so old but slightly tarnished, new, newish and newer! I leapt about in delight only mitigated by some outsize footwear!  On Friday the traditional Kitchen Party was held, but because it was warm we decided to move the kitchen outside, where the midges could more easily access our soft bits and all the food and wine could be displayed to the jealous admiration of passers by. 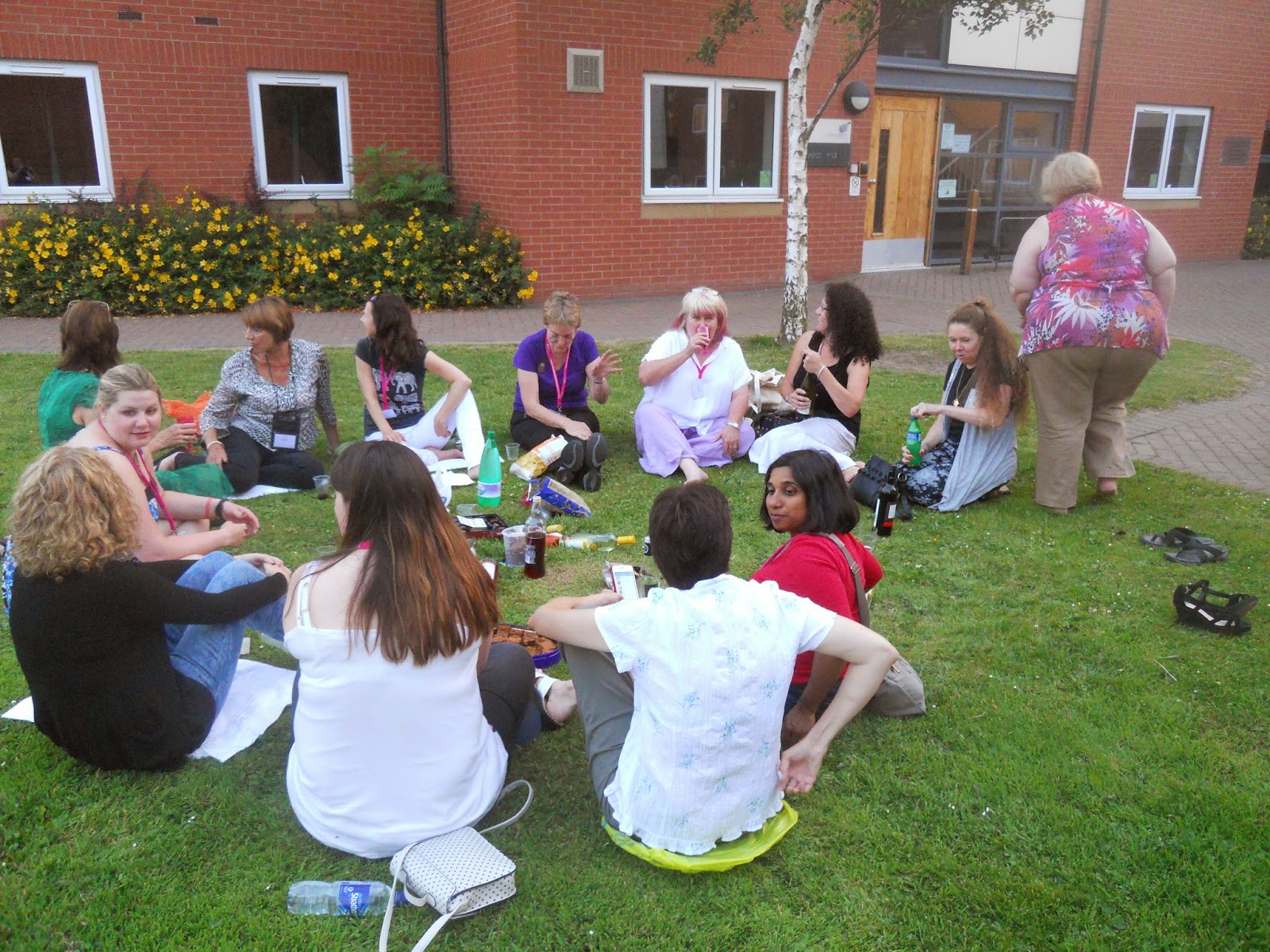 In fact, so happy and jolly was our little band of Kitchen Refusers, that we began to accrete others around us, like a pearl forms around little bits of grit. Only in this case it was less grit and more bottles and biscuits (oh, and brownies, courtesy of Alison May and Christina Courtney, who jointly increased the dimensions of my hips by at least two inches).

Then came Saturday. Rhoda Baxter and I did a talk, during which I might perhaps have worn a penguin onesie, but it was an illustrative onesie that demonstrated the Juxtaposition of Thingy which is at the heart of all comedy writing.  Obviously.  The onesie generated a large amount of mirth and sweat, both directly proportional to the amount of strutting I did. And, apparently, liking Tony Robinson is amusing, although I have no idea why... There are absolutely no pictures of the onesie... None.  It's astonishing.

Then came the Gala Dinner. 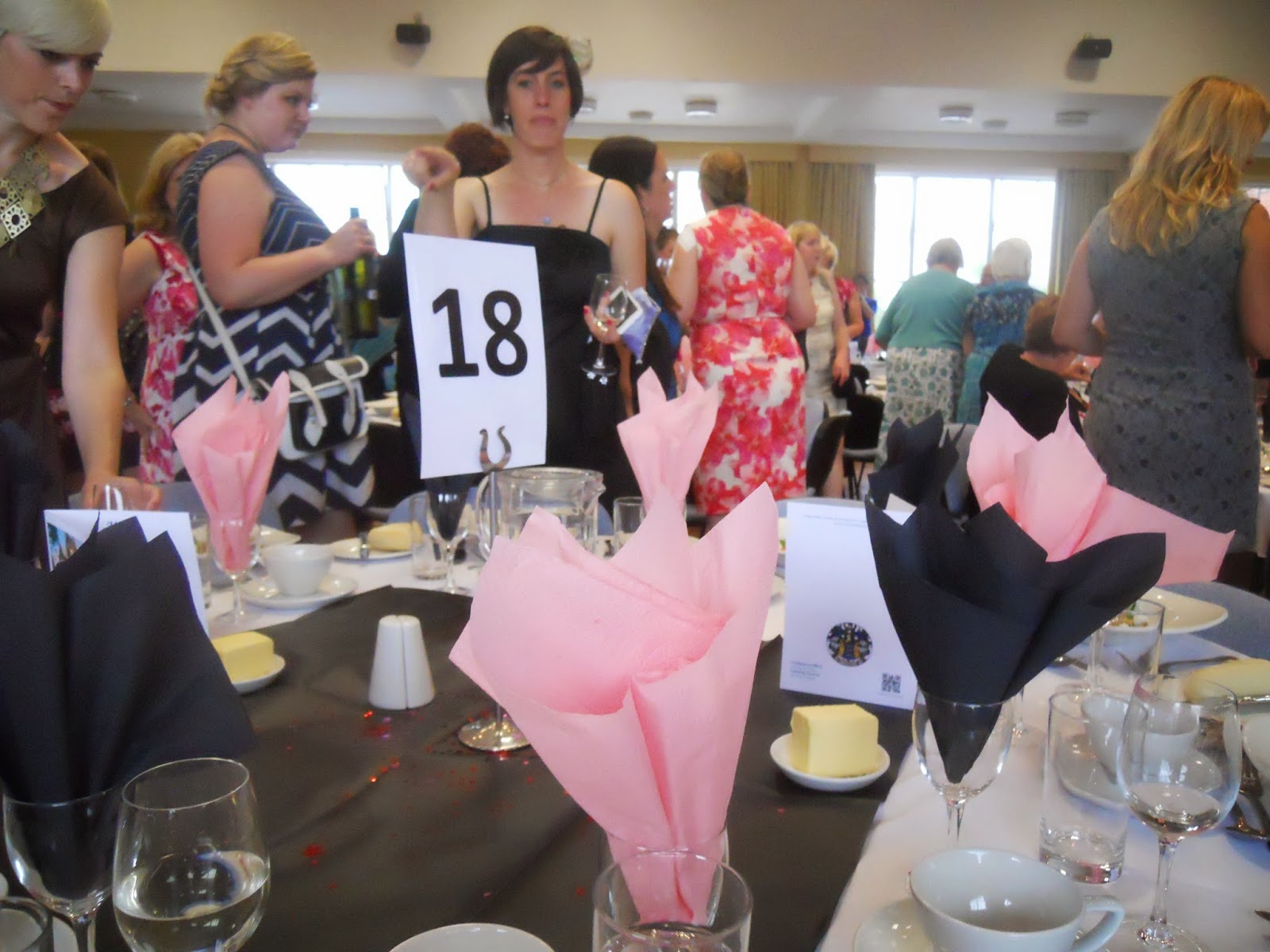 We were allowed to sit down, and I'm not sure what Sarah Callejo, Kate Johnson and Talli Rowland are looking so suspicious about, the butter was a lot more docile than their expressions would seem to indicate.  And the food was wonderful.

And then came the after-party. 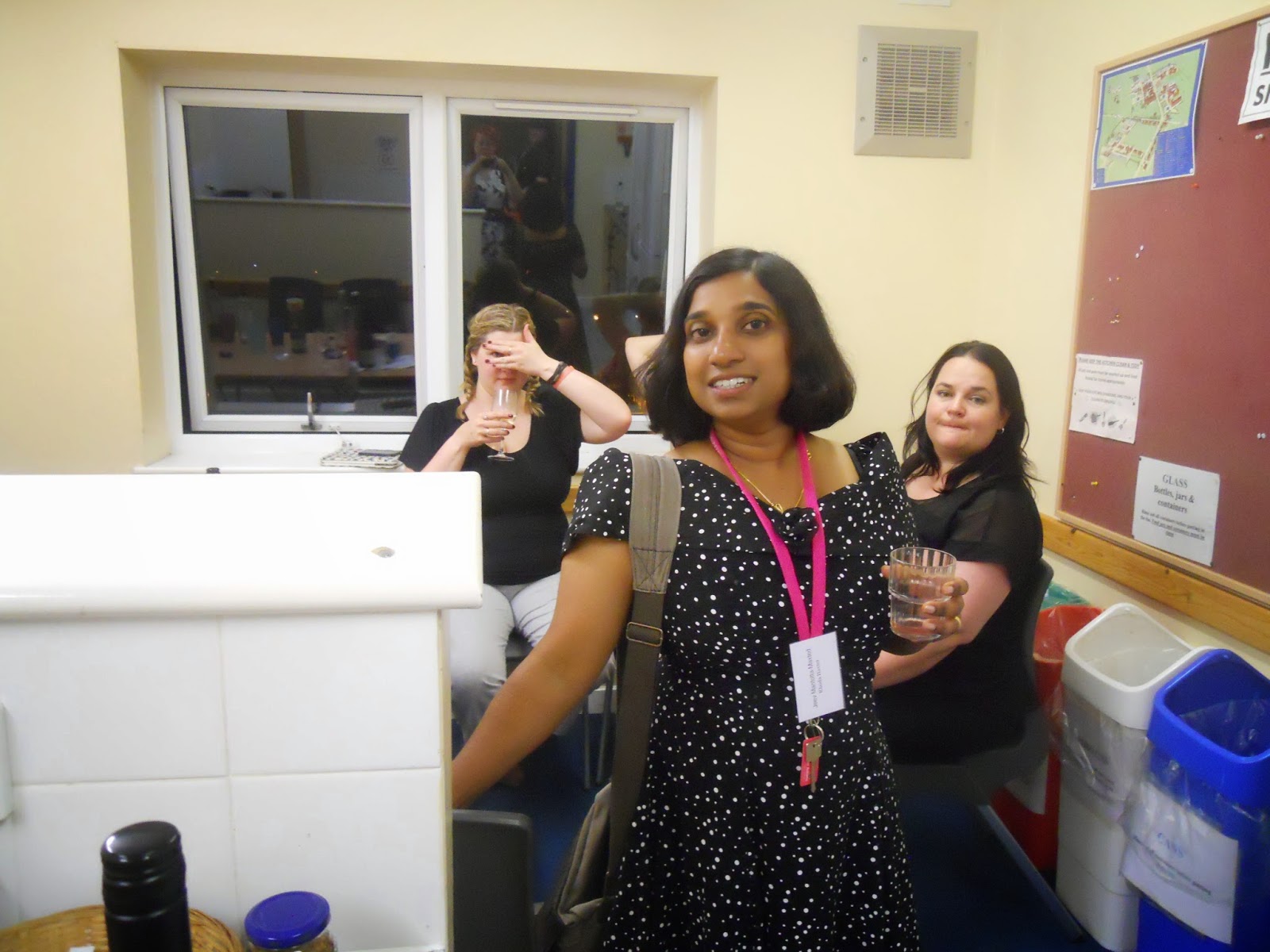 A representative sample of the reprobates taking part.  Rhoda Baxter, Liesl Schwartz and, trying to hide but rather missing the point, Kate Johnson.  Vast amount of alcohol, crisps, biscuits, chocolate not shown due to careful camera angles.

We discussed such writerly topics as beer-bras, sheep rolling, the inability of cats to decide things, the 'boob-wall' caused by corsets, the infamous Gusset-Fanning incident of 2010 and many other subjects.  And I came home, even though I didn't want to, fuelled by Rhoda Baxter and her mating chocolate.

You had to be there. And next year you had better be, or I'll send the boys round...

In which I am a day late, but have been adequately Pythoned, and I go back to someone else's roots.

Yes, yes, I know, where was I yesterday and all that.  I can hear you tapping your toes, looking at your watches and sighing from here. Well, I can't actually hear you looking at your watches, that would require a degree of acuity in the audio department which I don't possess unless you are opening a packet of HobNobs whilst pretending to yawn (because, yes, I can hear that. Don't think you're fooling anyone).

This weekend I was in London, hence the late bloggage.  Yes, I know they have computers there, but I was busy, all right?  I know you think you are constantly never far from my thoughts, as is indeed the case, but my fingers were busy.  And I can report that the Pythons were extremely funny, particularly when seen from a seat in the O2 so vertiginous that I was actually holding on to my seat for some of the performance, and when there was an intermission, I had to insist that everyone stay seated in order that the actual arena didn't topple over sideways.  But I had forgotten how funny the 'Blue Danube with Explosions' was, how true to life the Yorkshiremen ('shoebox in't middle of road') and how much I could laugh at the phrase 'cross-beam's gone askew on't treadle...I didn't expect the Spanish Inquisition'.

I just hope I am that agile and amusing when I am 107, as most of the Monty Python cast now are. 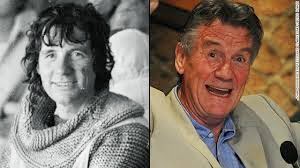 He was lovely then and he's lovely now... Not quite Tony Robinson, but still lovely...Not bad for 107.

And then, subsequent to the Pythoning, my brother (who's idea it was to Python in the first place) and I went back to the Isle of Sheppey. Oh, don't worry, most people haven't heard of it, even the people who live there call it 'that flat place with all the sheep'.  We used to spend summer holidays there when we were children.  No, I don't know why either, maybe our parents just didn't like us very much or something.  Well, no, we had an aunt who lived there. And an uncle. And a grandmother...all right, all right, so most of my family lived there!  And we used to spend many a happy hour in a house with a big garden on the island.  Oh, it's all right, the house belonged to an aunt and uncle, we didn't just break in to enjoy ourselves - and we went back to visit the very house and the garden (now smaller. No, not just because I am bigger, either...).  So thank you to the householders who were very understanding about this mad brother and sister combo, recreating a very old photograph in their garden.. 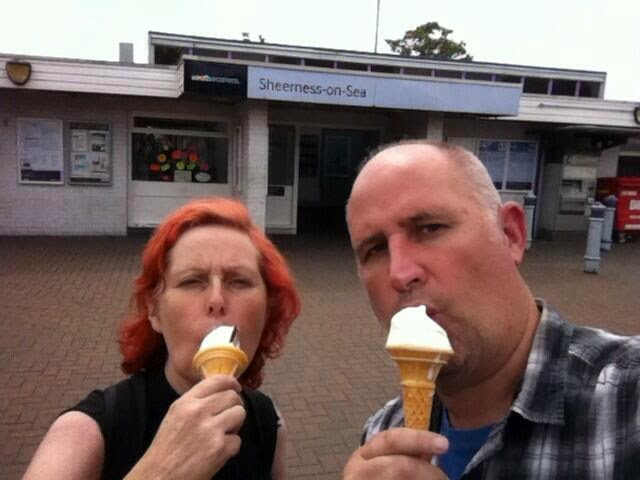 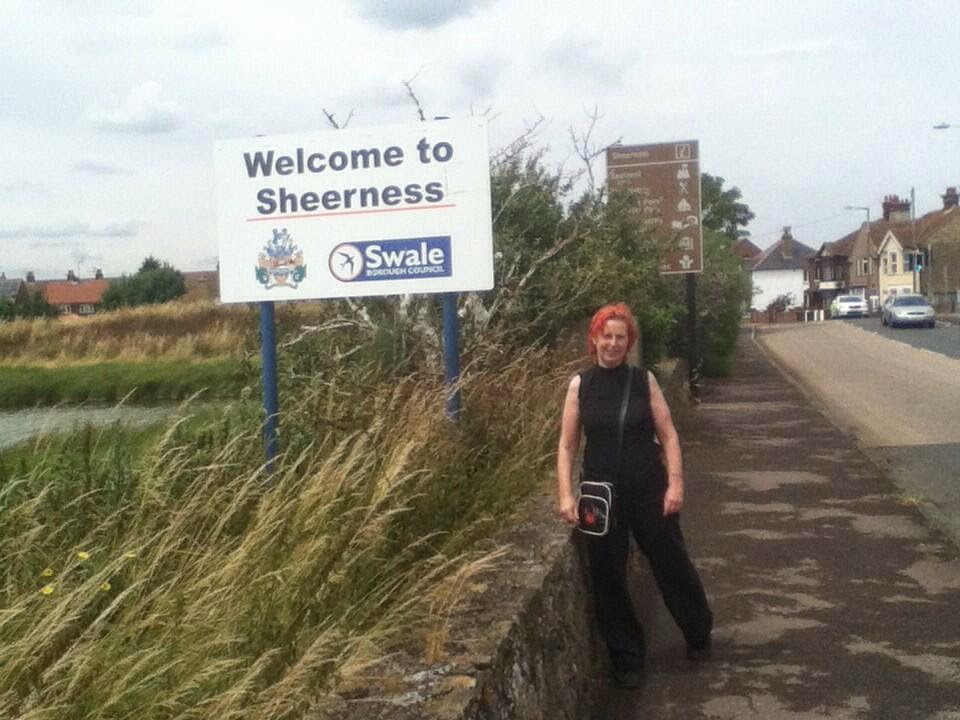 So, when they say you can never go back to your childhood - they're wrong. You just have to change at Sittingbourne.

Posted by Jane Lovering at 14:28 No comments: