Cheesy remembrances - or how I demolished my friends.

Yesterday I was perched on the edge of my cheeseboard, contemplating the fromage-related events of the day, when I was contacted by an old friend.

Now, when I say old, I don't mean old, obviously, because I want to live and not lose all my fingers to a tragic 'accident'.  Whereas I have aged in a cheesy way by becoming more veiny and dimpled and possibly gaining a smell which has a character all its own, my friend (or, as we shall call her 'Lin', because it's her name), has aged like wine, becoming more full-bodied and luscious.  And expensive, but that's another story for another time and another website, one with 'GirlsGirlsGirls' in the title.

And this made me think. Which is quite a feat in itself, because it normally needs quite a large thunderstorm and the application of some greased electrodes to achieve this result. 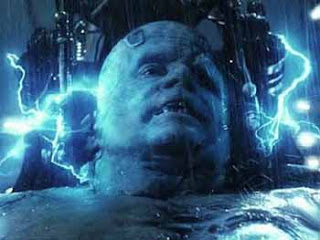 This was me trying to remember where I left the car keys.  Cheeseboard not shown.

How many of my old friends (still using the term to mean 'long time' and not 'aged', Lin, if you're reading this) am I still in touch with?  And by 'in touch' I mean, you know, Christmas cards and phone calls and things and absolutely NOT standing around outside their houses with a long-lens trying to get a picture of them climbing out of the bath - apparently friendship and restraining orders are two seperate things!  Who'd have guessed!

And then I answered my own question, which caused quite a few raised eyebrows and funny looks.  Note to self - when answering own questions, probably best not to do it aloud whilst standing in queue at the bank -  not many.  There are a few who look me up on 'Cheesebook' now and again, (tagline 'come for the chat, stay for the crackers') and I occasionally catch fleeting glimpses of familiar-looking hairstyles dashing down the road away from me whenI turn around suddenly.  But, apart from that, and the aforementioned full-bodied luscious one, most of my friends are new.

And then I worked out why.

I have to say at this point, I really didn't know what would happen if I pushed that giant button with the words 'School Demolition device - Do Not Press (unless you're the Head and it's been a really trying Friday)'.  To me it was just a big red button. 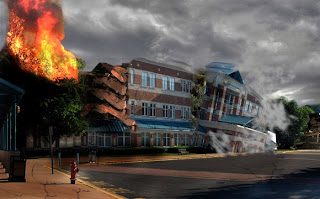 I tripped, all right?
Posted by Jane Lovering at 12:59 No comments:

Aha!  For all those of you who thought I only blogged at weekends (on account of only being allowed out of my cheeseboard then), here I am midweek!  And I have a special little treat for you - my new cover!  It's just been released, or perhaps I should say, unleashed and I hope that you agree with me in thinking that it's very pretty!  D'you know, I don't even care if you don't agree with me, I think it's a damn fine cover, featuring a girl who looks very much like my heroine Jemimia, beads which look very like the kind of thing that she works with in the story and a guitar, which looks very much like...errr..a guitar!  And, yes, there is a guitar in the book! 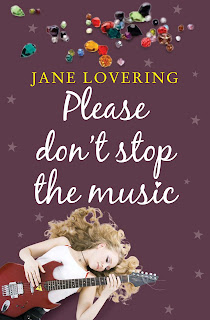 Oooh, now I'm all over-excited and attracting flies again.  I'd better go and lie back on some crackers until I feel more myself.
Posted by Jane Lovering at 13:50 15 comments:

Hello my dearies.  And also my cheapies.

Now, the other day I was sitting (well, no, actually I was squatting and hovering, in the approved 'using a foreign toilet' way which, now I come to think of it was rude because she's a friend and her sofa was quite clean), when I had a realisation.  This blog has been going for numpty-numpty weeks now, and yet you know so little about me!  Other than that I write books and can talk about nothing for ages.  So I have decided to rectify that, with this week's post, where I shall edify you!  Yes, this week's post takes the form of that thing that is so popular on Ye Olde Face-e-booke, the '10 things you didn't know about me'.  Hold on to your hats and prepare the line to the Daily Mail, some of these things may shock you.... 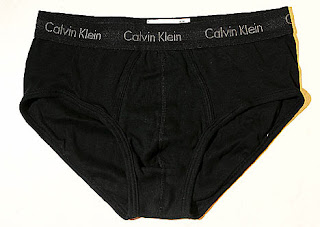 1.  I collect men's underpants.  Well, no, collect is probably the wrong word... what is the word I'm thinking of?  Ah yes, perve over.  But only those nice tight ones, not the baggy things that look like some kind of cross between a loin cloth and a skin condition.  And they must be tight because they're designed that way, not because the wearer bought them when he was fifteen and has worn them ever since, forty intervening years and nine accumulated stone notwithstanding.

2.  I am made of cheese.
3.  I knew the Lord of the Rings when he was still known as the Prince of Diamante Brooches. Nice lad,  big fan of the Sound of Music.
4.Um.  I must be able to think of more than three fascinating facts about myself.  Did I mention the cheese thing?  Oh.
5.  All right, stop it now.  Oh, no, hang on, I've just thought of another one. I can call buzzards.  No, really.  I make this kind of squeaky-whistling noise with my tongue, and ....look, it's like a whistle, sort of 'thweeep thweep', all right?  I can't explain it any better than that.  Anyway.  Buzzards seem to like it. 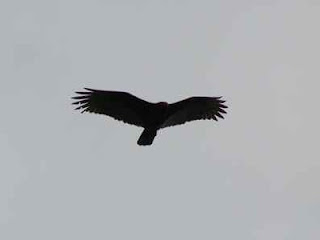 This is a buzzard.  Just in case you thought they were, like, leopards or something.  Look, I'm making no judgements here about your general state of intelligence - honestly, the number of times I've been talking to someone about, ooh, I don't know, Vichyssoise or something, and they'll have this intelligent face on and apparently be really interested in what I'm telling them only to turn round at the end and say 'vichyssoise?  Those are those little insects, aren't they?'  So.  I'm just saying.  Buzzards look like this. 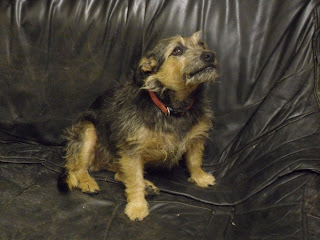 This is a leopard.

6.  I can tell the difference between a buzzard and a leopard.  So few can.  Honestly, it's a tragedy.
Now, let's gloss over the fact that Interesting Facts 7 through to 9 are really boring, and go straight for number 10.
10.  I am incredibly irresistible to the opposite sex. And you, you can stop sniggering, some men really like women who are made of cheese and can make conversation with buzzards.

And with those interesting facts, I shall leave you for now.  It's time to walk the leopard.
Posted by Jane Lovering at 20:18 3 comments:

As any of you who have paid even the scantest attention to me recently will know, I am in the process of editing my new book (Please Don't Stop the Music- published 01 February by Choc Lit publishing, available from Amazon and all good book retailers shortly).

And it may astonish you to know - for I am a clean living and well spoken individual - that a major portion of my editing is taking out swear words. 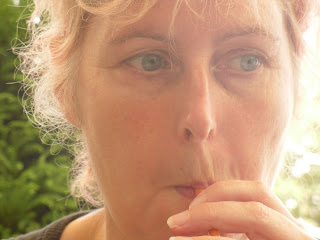 Aw, come on, can you imagine this face swearing at you?  This is a face that likes kittens!

So now I must put out an appeal.  Let us find homes for these now-unwanted swear words!  Yes, a bugger is for life, not just for Christmas!  And besides, I'm up to my knees in them, I mean seriously, and these things are expensive to maintain.  So, if you feel you can take a homeless swear-word to your heart, then make a donation today, or even offer a home to a lonely bloody.  These words were someone's vocabulary once; they were loved, appreciated, given a place in a sentence and now they find themselves excised from a manuscript with no sense of remorse! Cast out into the lonely cold world!  Doesn't it bring a tear to your eye?

Give what you can now and maybe you can save a sodding hell from a miserable end. 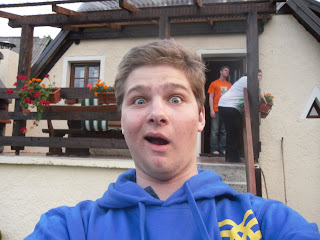 Imagine their little faces when they open the box and a bastard and two pillocks jump out to greet them!

And now, with your guilt well and truly invoked, I must leave you to return to my rehoming of all those dubious words... and I'll put you down for a buggery, shall I?
Posted by Jane Lovering at 13:50 11 comments:

Magazines called Bum stop you being a vampire, apparently.

Although I have ridden horses for many, many years, not one single photo of me on a horse exists.  There are many pictures of me standing next to horses, however.  I think this is odd.  Does it indicate that every time I get onto a horse I become a vampire?  Is horse-riding a major cause of temporary vampirism?  Because, you know, I don't remember any of this in 'Buffy'... 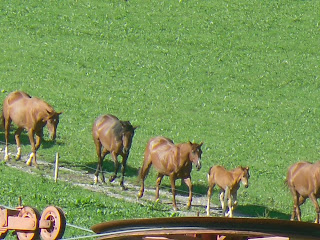 I'm riding the one in the middle.  Edward Cullen is on the bay and Spike is at the front.  Mitchell fell off.  And, if you look carefully, you can see my medieval siege weapon in the foreground.

This is just one of the major discoveries I've made during the past week.  I am a part time vampire.  It's amazing the things you find out, going through your holiday photos. 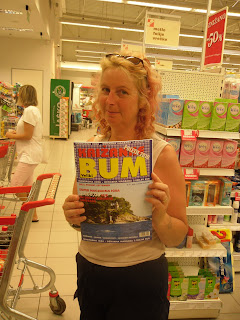 Slovenian's have a ....well, odd taste in reading matter.  Oh, and that I'm apparently not a vampire when standing in the middle of a supermarket holding a magazine called 'Bum'. 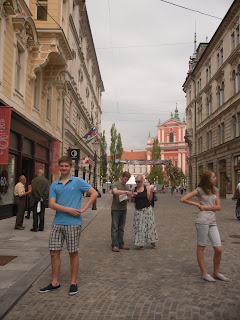 Two of my children are secretly book-ends.  Never realised this.  Call me Missus Unobservant if you want.  Also, map-reading - not vampiric. 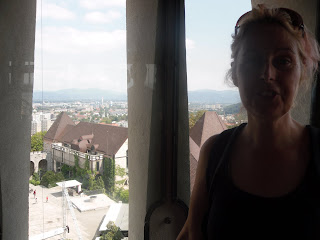 I am scared of heights.  Look closely at my face in this picture.  (Whoa, not too closely, you might want to try alternating eyes to avoid major sight-damage).  If that face does not have 'terror' written all over it then it's only because my pen ran out, what with writing 'help' messages and lowering them down the stairs. 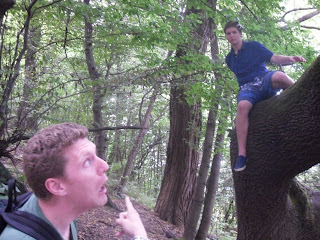 That I have been brainwashed by Lord of the Rings, into believing that woodland elves are beautiful.  Sigh.  Not a mistake I shall be making again.

There. I hope you've all enjoyed a quick canter through my holiday snaps.  If you wish to see any more then do pop over, I shall be pleased to regale you with all two thousand pictures, wine and cheese, and possibly a slap around the face when you start to drift off at around picture one thousand four hundred and nine.

And now I have to go and find a cure for horse-borne vampirism.  I suspect it involves secret herbs, incantations at midnight and a hefty application of a rolled-up copy of the Radio Times.
Posted by Jane Lovering at 13:16 6 comments: