Today I am marshalling ideas, rounding up sentences and driving inspiration through the cattle-crush of logic, where it will be drenched with the tonic of reality and wormed with the err....wormer of truth.

Enough of prevarication! Get thee behind me hoovering under the sofa cushions! No more actual cooked meals, as opposed to heating up of some vague lumps of stuff.  And welcome to facepalming despair.
The ideas I have in my head are shiny, immaculate things, expressed in words of such scintillating purity that they encompass the whole experience of being human.


And yet, I know that once I start wrangling those words; actually setting them down and making them real on paper, what will actually emerge will be more like

And so, dearest reader, wish me luck as I throw myself over the precipice of real life and prepare to drown in the tidal waters of Fiction!*

tortured metaphors have been excused 'just this once' by the Board of Fiction Writers, because I'm in a hurry...

Hobby Horses, the difficulties of naming inanimate objects, and staring at tadpoles.

I am about to start writing a new book.  Now, this is always a tricky time - I fidget a lot and mutter, and stare out of windows chewing my fingernails, but since this is almost impossible to distinguish from my normal behaviour, I forgive you for having overlooked it.  All I can tell you at this stage is that the book is about a woman called Winter, and features a little girl called Scarlet, who owns a hobby horse which operates under the dubious name of 'Light Bulb'. 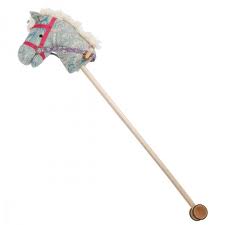 He looks a bit like this. Only he's red corduroy.

The idea for Light Bulb came from my eldest daughter who, at the age of three was given a small rocking horse for Christmas. When she was asked what she was going to call it, she thought deeply for a moment and then pronounced 'his name is Light Bulb'.

Yes, I know.  She also had a hobby horse, but he was called Saddie, and I refused to name Scarlet's hobby horse Saddie, so I fused the two experiences.  It's a tricky old thing, naming creatures in books.  Characters are not so hard in a way, you find a name that fits their age, background and upbringing; isn't too omnisexual, doesn't sound too much like any other names you've used in the book, isn't the name of a character in a different and entirely unrelated book, doesn't have the same initial or sound as any other names, isn't too hard for the reader to say in their head as they read....all right, naming characters isn't that easy.  Last week I talked about naming the dog in Hubble Bubble (Rufus, thank you Heather). And when you have peripheral pets or creatures like Light Bulb (who plays a large, if somewhat inanimate, part in the book) you have to get those names right too.  After all, Scarlet is eight, she's not going to name her hobby horse Shergar - she's never heard of Shergar. Besides, I'm willing to bet that Shergar, as a champion racehorse, did not wear a white plastic bridle and have one ear out of which the stuffing had come, leaving him with floppy red corduroy obscuring his vision.  If he did, then it's really no wonder he was stolen.

Now, if you'll excuse me, I have a day's worth of procrastination to be getting on with. There's a pond full of tadpoles to be stared at, and last night's episode of Doctor Who won't talk about itself on Facebook, will it?

Some little Factettes about the writing of Hubble Bubble. Plus, a link to buy it on Kindle! And a picture of a cute dog.

In honour of Hubble Bubble's slow journey down the slipway of publication and gentle splash into the world of Books That Are Read, this week saw it being gently poked into the public consciousness by way of being released for Kindle. In case this statement caused you an indrawing of breath and a sudden groping towards your pecuniary storage device, I shall make things briefly easy for you. Press this button here and you, too, may purchase!  (Clue - it should look like this - 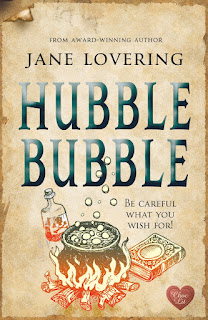 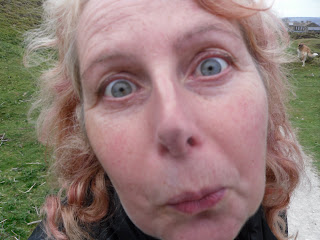 then you have inadvertently downloaded my face, and should go back and try again.)

In further honour of this event, I should hereby like to give you some snippetty little insights into the writing of said book. You know, if you're interested or anything.

1.  The original first draft was written in six weeks, as part of my attempt to NaNoRiMo. Which is National Novel Writing Month (usually in November).  I think you can all see that six weeks is not a month, and assume my consequent failure.

2.  The truly appalling weather which forms a backdrop to Hubble Bubble was actually going on as I wrote it. This was coincidental, I'd already set up the plot, and this did nothing to relieve me of the feelings that everything I write comes true.  Note to self - write next book about lottery winning woman on holiday in Seychelles..

3.  My workmate, Heather, came up with the name 'Rufus'.  I dashed into work one morning yelling 'Quick, I need a name for a big, scruffy dog!' as is my wont and, as usual, nobody was at all startled by this (working with a writer means that my entire department lives on its nerves and a thesaurus) and, after mass-consultation, Rufus was decided upon. 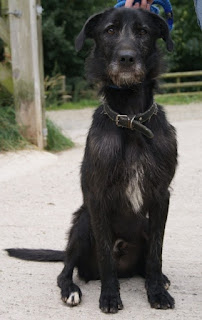 He looks like this, only a grey-brindle colour. (By the way, this pic comes from DogsBlog, a rehoming site for unwanted dogs,a terrific place if you are looking for a new companion. A dog one, I mean, not a person, I can't help you with people, although you may want to consider joining a club, or taking up a new hobby).

4.  Despite the title, Hubble Bubble isn't supernatural or paranormal, although it may contain traces of witchery. Any magic perpetrated is purely incidental - although not for want of trying on behalf of its characters - and it is as far removed from 'Charmed' as I am from Elle MacPherson.  Which, I think we can all agree, is as far removed as possible, whilst still being members of the same gender and species. It is more about the ability of humans to convince themselves that they are in control of their destiny and identity - although I have to say that if I were truly in control of my identity, I'd lean towards actually being Elle MacPherson.

And there you have it. Insider Information on Hubble Bubble, with which you can impress your friends and influence Beagles.

Dogs not of war, Cute feathery things, Vampire Weekend do not wear cardigans shock, and a radio show.

Oh, goodness, my little chuckleheads - what a time I have been having!  You'd think, wouldn't you, that with Hubble Bubble sitting in the wings like a leashed Dog of War, eager to be at the battle (I'm not actually sure what War Dogs would be like really.  Most dogs of my acquaintance are bone idle, and, faced with any battle you care to name, would most probably be found round the back, eating something they found stuck to a boot), anyway, with this barely-restrained fury about to be published, you'd think I'd be full-on with the marketing and stuff, wouldn't you?
Well, I have had Other Things to do, my fluffy little dustmonsters!  Indeed I have!  Firstly, there was London, where I went to do Some Stuff associated with Daughter 3, trying to work out whether she'd like to audition for Drama Schools down there, and generally peering at them through my spectacles in a dubious way.  I don't actually wear glasses, and had to borrow some for the occasion, which might have accounted for the excess of dubiosity exhibited.  Also, while there, attended the Vampire Weekend gig that I mentioned some weeks previously. It looked rather like this... 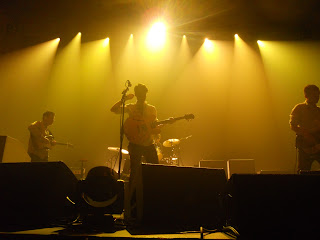 only was slightly louder.

Then today I found myself, in the interests of researching a book which is not even going to be the next book, but the book after that, visiting the local, newly-set up, Bird of Prey centre at Duncombe Park.  Well worth a visit, incidentally, should you little snugglebottoms find yourselves in the vicinity whilst attempting to stalk me.  There I met possibly the world's cutest owl, had a Close Encounter of the Cake Kind at the teashop, and furthered my interest in feathered killers, which is always a good way to spend a Sunday.

If you do not believe this to be the cutest little owl you've ever seen, then our relationship is over, I am afraid.

Tomorrow, however, is a different kettle of pencil-sharpenings, for tomorrow I do Publicity Stuff!  I am appearing - if one can appear in voice-only, which I doubt, even if I do it loudly, on Radio York, in a kind of cut-price Desert Island Discs capacity, in a feature called 'Getting to Know..'  Although what they could possibly want to know about me I have no idea, after all, I am an open book, am I not?  All right, the book in question is mostly obscene, and full of diagrams, but even so.  I am also allowed to choose music for them to play!  I did, for one brief moment, think about asking for Peruvian Throat Singing, but I restrained myself, which, I think you can all agree, is practically a first.  If you find yourselves so-minded, you can tune in to Radio York tomorrow between 3 and 4, and hear for yourselves how I convince listeners that I am made of cheese....