Writing retreat - that's a retreat to DO writing, not FROM it...

Just for a change I’m not writing this in the depths of my bed.  It’s a change for me, obviously, not for you, because you haven’t got a clue where I am when I’m doing it – for which you should all be very grateful actually because I know how easily alarmed you all are.  No, today I am writing this from the depths of a church hall somewhere in Barnsley.  At least, I think it’s Barnsley,  it’s somewhere like that anyway.  Begins with a B. Isn’t ‘Bahamas’.  Which brings me to my topic of the day…
I am here because I am on a ‘Writing Retreat’. My RNA Chapter (no, not really much like the Hell’s Angels, although we are capable of some quite extreme levels of annoyance when Pudding Wars break out and there’s not enough chocolate fudge cake to go round) have taken ourselves to this very hall for a day’s solid writing, away from the evil influence of the Internet, electric blankets, day time television and, in my case, a cute puppy.  We’re here, sitting in rows like very single minded exam candidates, writing away.  And it’s great! My mind has rarely felt so concentrated! There’s nothing like a room full of people surrounding you for making you aware of every SINGLE toilet break or cup of tea that you just ‘have’ to have!  There’s no distraction, because you know that if you spend the next twenty minutes staring at the ceiling, SOMEONE WILL NOTICE.  And, furthermore, you will be unable to fib your way out of non-production on the grounds of ‘research’.  No.  You sit in front of your screen and you type as if your very life depended upon it. 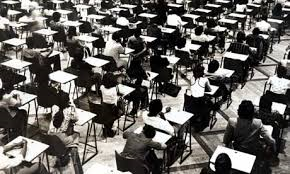 Like this.  It's a veritable story-factory in here...
Now, I understand that popular writers’ retreats are usually located in places like Italy and France, where people go to be fed four-course dinners, lie in the sun and apply themselves to their writing.  Well, if this isn’t a financial option (as for most of us it isn’t, as even the one-course dinner can be a little budget-straining), can I recommend the Village Hall option?  We’ve got electricity, heating, a kettle, and we’ve brought enough food to be able to barricade ourselves in and survive any but the most determined zombie apocalypse.  Okay, we don’t have a swimming pool, but why would we want one?  We’re supposed to be writing not perfecting our breast-stroke. 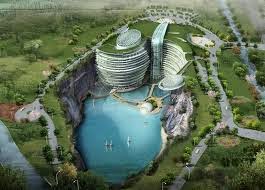 I’ve just noticed.  There’s netting across all of the windows.  And they appear to be sealed shut.  Hang on, I’m going to try the doors.  If I’m not back in ten minutes, call for help….

Stuffing your bouffant into your pants and being mad in a 'cat/dog interface' way.

I must be mad.  No, not in the 'obviously I'm mad, I'm a writer, which is sort of the definition of 'you don't have to be mad to do this job but..what am I saying, of course you do, in fact the job description actually specifies wearing your pants on your head'' way.  I mean  I must be mad in the exasperated way that people say it when they've gone and done something that that didn't really want to do because they'd already exhausted all the possibilities of doing it and come to the conclusion that it just wouldn't work.  If you see what I mean. Although, you're probably stuck at the bit about writers all having it in their contracts that they will wear their pants on their heads and you're busy imagining J K Rowling and Jeffrey Archer sitting around with their bloomers over their expensive salon hairdos. Saying that, though, Jeffrey Archer has less hair than JK, so he would feel more comfortable with - and I am extrapolating now, I have no insider information as to the actual emporia in which he purchases his underwear - a large pair of M&S briefs firmly pulled down around his ears. 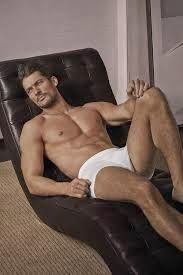 This is possibly the only time you will ever see these two pictures juxtaposed. If you remember Rhoda Baxter and I giving our talk, now is NOT the time to think about a juxtaposition of thingie, all right? I can't afford another court case, not after the last Tony Robinson experience.

In fact, I think I may have just discovered why most of the hugely successful best-selling authors are men! It's the pants/head thing! Women writers just have too much hair!  It is hard to get your knickers to sit right if you're all bouffant, they keep sliding over one ear, thus restricting the creative flow. 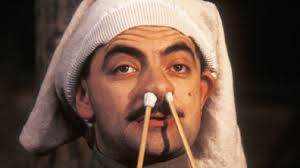 You cannot deny the creative genius here, after all...

Now, where was I?  Oh yes, the 'I must be mad' thing... Well.  I've given in to family pressure and acquired a puppy, to add to the family roll.  The older dogs think I'm mad, the cats think I'm certifiably insane (but then cats always think that), and the chickens are in for a hell of a shock, but for now... 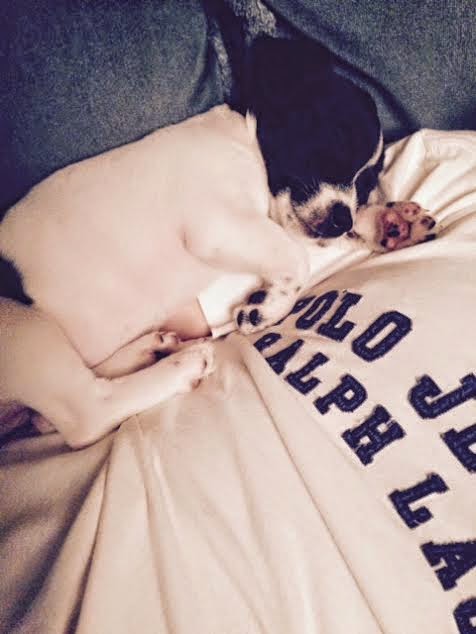 ...meet Teal.  A ten week old Patterdale terrier, who currently thinks she is a cat. 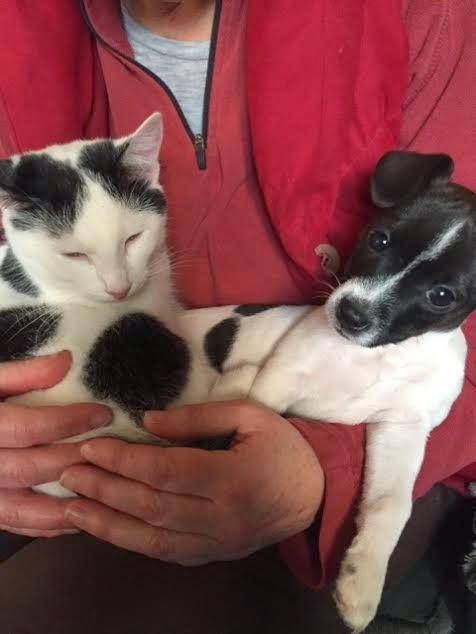 Are my pants funding illegal activities? Plus a bit of...what the hell just happened there?

WARNING: this post may contain traces of moaning and complaint and a musing about the fabric of underwear. Do not read on if these things may offend you.

Okay. Has everyone who might be offended gone?  Good.  Now is the time to break out that emergency Prosecco that I hid away under the bed for just such a moment, fill our glasses, and muse...

A couple of weeks ago, having earned some money that was unspoken for, I ordered some pants. Knicker-pants I mean, not all this trendy American-trouser thing. Pants. Proper big pants, for my requirements in underpart-containment are, oddly, precise. And, because they are precise, these particular pants are quite hard to come by locally. Actually, locally pretty much anything is hard to come by unless it's green veg and cattle feed, but I shall gloss over this.  So I ordered on the internet and waited with bated breath and free-hanging underparts for my pants to arrive.

And, reader, when they did I was slightly disappointed. For, instead of the firm fabric and intensely containing elastic, I found a flimsy pant, one where the gusset was already parting company from the rest of the pant, a state of affairs that it takes my regular pants some months to achieve! Yes! 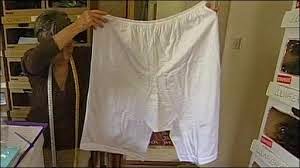 So my only conclusion is - that these were, in fact, fake pants, and that my money is currently being used to pay for a Sicilian drug cartel's running costs. Which is slightly annoying because I'm pretty sure my needs are greater than theirs, unless things have been really bad in the cocaine-smuggling business lately and they've all had to downsize - in which case DO NOT DOWNSIZE USING MY PANTS!

Ahem. Another glass of Prosecco may be called for, although not too large a one, on account of these new, flimsy pants not having the..err...absorbative powers of the old ones...

Which brings me to my second rant of the day.  On Thursday I received an e mail from my heating oil supply company telling me they would be delivering that day. Oh, thinks I, that's good, because with oil prices now at a huge low, if things can have a big low thing... maybe I shall ring up later and find out what their unit price currently stands at.  Reader, 700 litres of oil usually cost me somewhere in the region of £360, so I was rubbing my hands with glee and awaiting a nice big price cut which would mean that, finally, I was no longer in arrears with said company.

£408.  That is all I will say.  55p per litre.  When a swift Google reveals the price to be standing at around 39p per litre. Incandescent?  I barely needed said heating oil, for my fury heated up not only the house but also several acres of the surrounding area and two small towns that happened to be nearby.

Sorry, but I have to go now and change all my lightbulbs for red ones, then go and stand in my front room in nothing but my big pants. That £408 isn't going to earn itself, you know...

Firstly... I believe convention requires me to wish you a Happy New Year here.  So...

HAPPY NEW YEAR!
2015 is a particularly angular year when written down, which probably indicates a future of hanging up coats, breaking windows and weight loss, with the circular nature of the 0 foretelling that we shall immediately regain the lost weight and our adhesive coat hangers will not be the bargain we thought they would when we bought them in IKEA.  (I am convinced this is how horoscopes are written. Trust me, 1224 was THE year for coathangers...)

Since this is a new year, and convention also dictates that we will all be hell-bent upon self improvement, at least for the next five days, until the early mornings/aching muscles/lack of chocolate cuts in and we revert, I feel it incumbent upon me to list a few things that I shall be undertaking in 2015 in order to improve my life.

I suppose I could do more regular housework.. 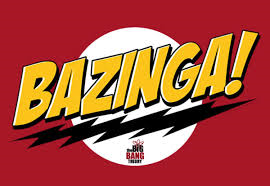 Oh, the looks on your faces.... No of course I'm not going to start with any of that stuff! Although I do have to admit that the pre-Christmas house clean revealed that my carpet has a pattern on it and is a kind of reddish colour, not the all-over grey that I had assumed. Plus we found a cat we didn't know we had, and there was a packet of HobNobs in the garage.  No, I've no idea why either. Perhaps I parked them there.

I know. I shall resolve to do more writing, that should do it.  Or, more accurately, I shall include things like this blog in my 'writing wot I have done today' count.  I am well known for writing a couple of short stories, a blog post, a newspaper column and a guest interview and then getting cross because I haven't added any words to my WIP, on the grounds that 'I haven't written anything today'.  So I resolve to allow ALL words written to count towards my writing tally. Yes, even the begging letters to Tony Robinson - after all, it's all writing, isn't it?