Expecting The Beast, how far up the cat will it go?

Well, we've been warned. Cold weather is, apparently, on its way.

Now, it might have escaped some people's notice, but we've actually been entertaining a little season we like to call 'winter' lately. You know, that time between November and May when it gets darker and the birds finally shut up and the grass stops growing? That one?
And the temperature fluctates on a day to day basis from 'nice in the sun but chilly in the wind' to 'cor, blimey that's cold, I'm going back inside to light the fire'. So. Winter is Cold. We can deal with that.

But, apparently, this Cold is bringing Snow! There might be lots of it!

Thanks for that, weather people. Can you stop giving me predicted snowfall in centimetres and tell me how far it's going to come up the cat? I still, despite having had a run of many years at it,cannot think in centimetres, but if the weather person could stand in front of their map and, maybe, indicate? With their hands?
'In Yorkshire, we're forecasting around five centimetres of snow, which is this much' (holds hands apart to show how deep it is) or, approximately a quarter of the way up the legs of your average cat. For Jane Lovering, that means, don't let Zac out, but Big Arthur should be absolutely fine.'

That would be nice.

Good grief, will you look at the cobwebs in here! I mean, I can practically write my name in the dust. Although, why I'd want to given that my name is in fairly big letters on the top of this website I have no idea - certainly time to get in here and have a bit of a wipe round with a damp thingummie...

Anyway. Hello. It's been a while. Mostly because I've been on Facebook, Twitter, publisher's blog, pretty much everywhere, and nobody needs THAT much exposure to me. So, what have I been up to? Well, apart from the things that are currently being taken into consideration by the legal profession (I'm up to forty nine injunctions, I believe that is some kind of record, but I think Sir Tony is really going to like the big surprise I've planted for him in the shrubbery), there's a few things..

I've had a Christmas novella out (this one)
I've got a new book out (this one)
The book (not that one, the one before that, this one) and the novella (yes, that one) are on the RNA shortlist for, respectively, Romantic Comedy Novel of the Year and Short Romance of the Year (I thought that was just Tony, but apparently not).

I've been to Australia, where it was very hot and sunny and I behaved impeccably and didn't get thrown out of anywhere. 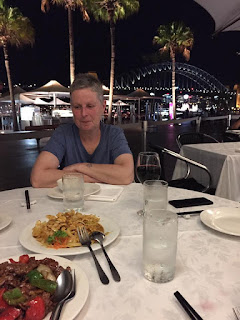 But I did look pensively at a large number of different foods, some of which just might have had the Sydney Harbour Bridge in front of them.

I might even go back. There's still a lot of food I haven't looked pensively at. Bacon, that needs a good staring at. Fruit bonbons. Tomatoes. That sort of thing.

Anyway. Back to the blog. It's time this place had the windows opened, bit of a breeze through. There's a very strange smell in here...
Posted by Jane Lovering at 20:02 No comments: