'How long does it take to write a book?' A lifetime and counting...

Everyone (and this is quite literally, everyone, from people who meet me at book signings, to the elusive milkman, who only speaks to me from the other side of the road, while running away) wants to know how long it takes to write a book.   Usually because someone suggested that they take up a hobby, and crochet or macrame seemed to involve too much committment, so they thought writing a book might be a nice way to pass a couple of afternoons when the weather was too wet to go out.


So. How long does it take to write a book?  That's a question that's a bit like 'how long is a piece of string?'  I wrote one of my books in six weeks.  Others take around six to nine months. One took over a year.  But that's just the physical writing, you see, the bum-on-chair, fingers-to-keyboard, biscuit-to-mouth stage. The stage where people can see what you are doing.  There is a whole stage previous to that one, which is a stage I call 'cooking the book' (which is not at all like 'cooking the books', which is strictly illegal and, since I cannot reliably count my own fingers and get the same number twice, probably not something I shall ever do).  This is the stage where a writer walks around a lot, talking to themselves, sometimes ejaculating such gems as "if it's purple, it could work!" and also sometimes wearing their pants on their heads.

You see, if you aren't a writer, you won't understand this but...to a writer everything is writing. A writer, upon very reasonably being asked what the hell they are doing when they are standing in a field poking a large tree with a stick, can pefectly honestly answer 'I'm writing'. Because, in their head, they might need the information about what happens when you poke a large tree with a stick (no, I've no idea either, but maybe they are writing Swedish Crime Thrillers, where a lot of tree poking goes on. I understand. I don't read them. Because of the tree poking thing).
Plus, of course, all of life informs a writer's writing. I'm told that life imitates art, but when I tried imitating Venus Rising I just got told to put my clothes back on and to get out of the fishmonger's, so I'm not sure how that works, but life certainly informs art.  You can always tell a writer because, when their house burns down, their husband leaves and their children appear on the front page of The Sun, they will say through their tears, 'It will all go in a book, one day'.

And it will. But it might be twenty years down the line when everyone else has forgotten. But writers Never Forget Anything.  Anything plot related, that is. I can't remember where I put the car keys.
Posted by Jane Lovering at 11:38 1 comment:

Unless anything terrible happens between now and then titlewise, it's called The Little Teashop of Horrors, and I hope very soon to have a cover to show you and a blurb and all those conventional things.  Until then you are just going to have to take my word for it.

It is, of course, set in North Yorkshire, in a stately home called Monkpark Hall (loosely based on this house)...

No, it's not my house. My house has more cats than chimneys.  This is Nunnington Hall.

It's about Amy, who lives with the grandmother who brought her up in a cottage on the estate, and Josh, who gives demonstrations of flying with his birds of prey and lives in a caravan.  So it's not about landed gentry in an Upstairs Downstairs way, it's more about what happens if you live in a tied cottage and need to work on the estate to keep your house, when the person taking over the management of the place threatens your job...

One of the stars of the story is a barn owl called Skrillex, who looks a bit like this 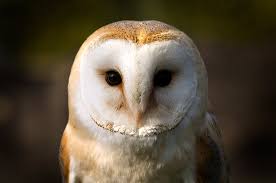 It also contains many mentions of tea and scones, considerable amounts of baking, a hidden staircase and a large quantityof brussel sprouts.  There's a ghost-that-isn't-a-ghost, a motorcycle and gratuitous mentions of Whitby Abbey too.

Now. You were going to put 28th of March in your diary, weren't you?  Go on, I'll help.  E-book, out on 28th March, called Little Teashop of Horrors.  By Jane Lovering.

And hopefully I'll soon have a cover to tease you with!