So, today is publication day for Home on Folly Farm (it's all right, you can go and look, I'll wait)....

... so I thought I'd take this opportunity to let you in to some Secrets From My Brain about being published, publishing and the whole Becoming A Published Author thing.

I used to think that all I ever wanted was to be published. Once would do. One book, out there in the world with my name on, that would make me happy. But it's suprising how that goes. I got one book out. Then I discovered the world of reviews and my view of being published changed. I didn't just want one book out there, I wanted one book that had great reviews. Then I wanted a book that had lots of reviews, never mind how great they were. Then I wanted to be in bookshops (remember those?). It never stops, the always wanting the next thing, always thinking 'oh, yes, they might only have give this book four stars, but they are going to LOVE the next one', always trying to outdo the book you wrote before.

You can never stop. Each book pulls along a string of your previously published books (known as your 'backlist') and inspires confidence for your next one. So, for example, Folly Farm has just been published but, to me, it's already an 'old' book. My editor has the next book, which she's working on now, and I am 40k into the new new book, provisionally titled Backstory. My mind, however, is currently working on the new new new book about an exploding house. You don't just publish one book and then lie back eating grapes and name dropping Margaret Atwood. You send one book out into the ether and then you get on with the next one. And the next one. To the extent that, when people ask you questions about your just-published novel, you have to go away and look up the storyline, just to remember who's in it and what they do.

Publication day is what you make it. This took me a long time to learn. Somehow I believed that, like with my birthday, everyone would magically know it was a special day for me and would work away behind the scenes to surprise me with hand-crafted items, calls, cards and even, in some cases, balloons. This does not happen. Just as with birthdays, publication day is just a normal day for everyone else. I know some people have trained their family into treating them with all the deference that is due every author on the day their book comes out in the world, but here it's only me and the dog and she's not impressed at all. So I try to make publication day special for me. See above re grapes and Margaret Atwood. Plus I try to take the day off work and flop about in front of the computer, 'liking' Tweets and regularly putting BUY MY BOOK on Facebook.

Gratitude. I am so, so grateful to everyone who has struggled to get my book out there - from my agent (who has always wanted me to write a book about sheep. I worry about her) to my publishers who made it happen; the book bloggers who take part in the blog tour that raises the profile (and who do a lot of sterling work behind the scenes), right through to you, the reading public, who buy my books. Unless you are a relation of mine reading this, in which case, get off the computer and go and do something useful. Like buying my book. Every time someone says 'ooh, I read one of your books!' my first reaction is not 'which one?' or 'did you enjoy it?' but sheer gratefulness that someone has seen fit to part with money in order to buy one of my books. And gratitude that I am here, able to enjoy that sensation of having books out there in the world. And reviewers. All authors are pathetically grateful to reviewers. Even people who leave one star reviews and poorly spelled, grammatically incorrect write-ups. It's still a review.

Right, now if you will excuse me, I am off to wallow about drinking tea, eating cake and celebrating my latest release. I might even get dressed later. 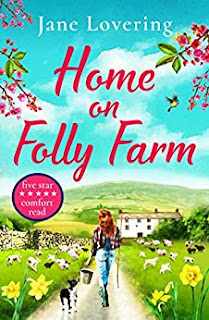 Posted by Jane Lovering at 09:19 No comments:

I know, I know, you don't hear from me for months and then, there I am on every available social media outlet with yet another book!

Sorry. It's happening again. This time it's a book called Home on Folly Farm, set up on the Yorkshire Moors (which, please note is NOT THE SAME PLACE as the Yorkshire Dales, as many people seem to think. And neither is it where Heathcliffe pratted about while Cathy did her droopy 'he'th juth tho handthome' rubbish. No. Those places are over the other side of the county and every time someone mentions the Brontes in connection with the Yorkshire Moors, they collectively rotate in their graves).

It features sheep. Lots of sheep. Too many, according to one reviewer, I'm not quite sure what she thought the book was about when it's got sheep on the cover and it's about a farm, Maybe some people don't want to read about the piles of poo and being up all night end of farming. I know those who live in cities often have a view of farming that is all picturesque and lots of gambolling through daisy-strewn fields in pretty dresses, but that's not farming, that's a perfume advert. Farming is far more grubby than that. And tiring and hard. Animals die. Things leak. People shout. Sometimes people leak and animals shout and things die.And that's the kind of farming I write about, so beware if you just want pretty buildings and sunshine.

This is it. You can pre-order it here, and it releases on 16 March, which is very very soon and I ought to go and buy a cake or something to celebrate. Maybe I'll buy a sheep-shaped one...

Posted by Jane Lovering at 15:58 No comments:

Well, it's been a while, hasn't it? And here I am, older and wi...well, older anyway. And with two new books under my belt!

Firstly, A Seagull Summer was released at the beginning of August, which was lovely.

And then, with much fanfare and general fanning of various types, The Country Escape was released on Tuesday of this very week. It's currently off on its blog tour, being escorted around various lovely bloggers' sites, being trotted up and showing off its not-inconsiderable paces. I understand it is behaving itself impeccably and hardly biting anyone. Which is nice.

Now, as you are loyal (and even, in some cases, besotted) followers of my writings, I thought you may like some 'original content' and insider secrets about The Country Escape and writing thereof. So this is the perfect place to let you in on said secrets.

1) Harvest Cottage was very much based on my living accommodation whilst I was writing the book. It wasn't so much a cottage as a house, and in deepest, darkest Yorkshire rather than Dorset. But it had all the other attributes - damp down the walls, plants growing behind the furniture, no heating and woodlice in just about every orifice. Not everywhere in the country has double glazing and central heating... I wore a lot of jumpers.

2) Patrick is based on an amalgam of ponies through the ages. Now, I am a reasonably heighted person, at around 5 foot 6 inches, but due to a peculiarity of biology, I have short wee legs. This means that whilst most persons of my height ride elegant horses, I was doomed to the world of pony, to avoid looking like a paperclip on a sofaback. All my life I've ridden the Patricks of this world - stocky, hairy and frequently outdistanced by, well, woodlice.

3) I have raised three daughters through the 'Poppy' stage. Mostly they were a little less abrasive, but they all had their moments. And no, none of them got a Versace handbag, never mind two.

4) The original cover of The Country Escape didn't have a pony on. It had a ginger cat. I'm not entirely sure why, since cats only get a passing mention in the book. I suppose the countryside is full of cats, so the chances are that one or two would frequent the garden of Harvest Cottage, but not on my watch. The very lovely people at Boldwood changed it for me.

5) I have a friend who sews exquisite patchwork quilts. Honestly, the work that goes into making one, with all the cutting of templates and the fitting together and the sewing - well, I don't even have the patience to describe all the stages, let alone to actually do them. I am to sewing what Andy Murray is to...well, sewing, I suppose. Unless he has a whole alternate career in embroidery, which I doubt.

6) This is the fourth book to be set in or around the fictional Dorset village of Christmas Steepleton. I had to draw a MAP! I kept forgetting which way round the bays went and where the harbour was in relation to the shops. I do not think I will be causing Ordnance Survey any sleepless nights, since the resulting map looks as though it was drawn by a nine year old 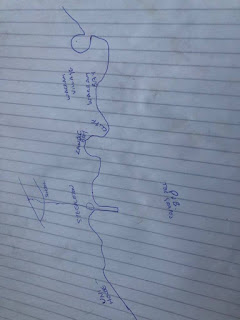 Please don't laugh. Please. I know I can't draw. And I couldn't find any plain paper. I don't know how to explain the stains, but that's pretty nearly the story of my life.

Anyway. There you go. The Country Escape.

Posted by Jane Lovering at 19:31 No comments: