The excitement of a new Hoover head - why editing turns your brain.

Now, I'm still supposed to be editing, so I'm going to make this quick.

All right, I'm not going to make it that quick, and I can't do spoilers in case some people haven't seen it but...wasn't it just rotatingly good?  In fact, if I can fit in a short break from this editing (which I really shouldn't because, you know, reasons...) I may just have to iPlayer it again.

And, amid all this, there's Christmas shopping to be done, and food to sort out (yes, I still regret last Christmas, the Christmas of the Mountain of Mince Pies. That mistake will not be made again) and, because it's my birthday next week I bought myself a present.  A new head for my Dyson hoover.  Now I come to think of it, this is more of a present for the Dyson than for me, but since the Dyson is an inanimate object with no feelings or humanity...which, now I come to think of it is a pretty good description of me...I'm calling it mine.

So.  Today's list goes: - Edit.  Cook food. Think about Christmas and add stuff to Amazon wishlist for self.  Delete it.  Add stuff for other people.  Feel left out and try to remember the stuff added for self. Waste four hours trying to find it. Think about Christmas some more. Stare in fridge and despair. Stare in freezer and despair. Find 'thing' in freezer left over from last Christmas. Stare at 'thing' and wonder what is. Stare at Hoover.  Affix new head to Hoover and push, in desultory way, around carpet. Realise this less fun than editing. Go and stare at 'thing' again and wonder if can get away with serving for dinner tonight. Watch Doctor Who on iPlayer. Stare at Doctor. Stare at Tom Baker and suffer flashbacks to 1973. Stare at edits. Defrost 'thing'.  Stare at defrosted 'thing', still unidentifiable.  Eat chocolate, make Christmas list, stare at edits again. Go to bed. 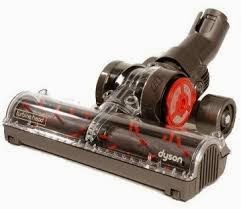 I know.  Exciting isn't it?  Look, I'm editing, I find used matches exciting at the moment.  And this goes round and round and makes a 'whhhiiiirrrr' noise.

Editing. And the pure, naked excitement of...no, sorry, actually just editing. Oh, and I coin the term 'Book-Pregnant' to excuse my bottom.

So. I am now In Editing.

This is an official term for when we writers lie down under the duvet, occasionally banging our heads against any firm object muttering 'no! NO!' and eating biscuits. It is a complicated time in a writer's life.  Imagine, if you will, that producing a book is like having a baby - this is an analogy much loved by writers because it makes us believe that we are not, in fact, getting fatter due to biscuit-consumption, we are 'book-pregnant'.  So, we slave for the obligatory months to gestate our book, then we send it off to be cooed over by our publishers.

Who promptly want us to shove it back in again and have a better looking one next time.

It is not exactly like this, of course, because I quite enjoy editing (knowing that I produced a big, ugly one which needs quite a lot of surgery to get presentable before I can, so to speak, wheel the pram down the road helps) and I most emphatically would not like the process of jamming any of my children back up my nethers. But it is similarly difficult and slightly off-putting.

..only even bigger, because I am having a series. Editing is also a bit like unpicking a cardigan, carefully knitted in complicated cable-stitch, and re-knitting it into a sweater with a picture of the cast of The Simpson on the front - they are both the same garment, essentially, but the overall object is different.  Only with mine, I rather overknitted the first garment, so it wasn't just cable-stitched, it also had epaulets, frogging, military buttons and a rather nice forty-foot train, so now I need to go back and remove some of the more unnecessary decoration and make it a little more...wearable in public, so to speak.
So bear with me, kind people, because I now have the rather confused impression that I have to go and knit myself a baby...
Posted by Jane Lovering at 13:20 3 comments:

Festival of Romance, and I go for a nice lie down. Or up, if the Viagra takes effect.

Just a quickie, because, darlings, you know me and you know just how much beauty sleep is required to keep yours truly beautiful... in fact, on some days I don't even get out of bed, but I am ravishingly gorgeous despite this.

No, I have just returned from the fabulous Festival of Romance in Bedford, where, along with other luminaries, I was shortlisted for a Readers' Award!  Sadly, for my shoes were things of devastating beauty, I did not win - the award was, in fact, picked up by the wonderful Liz Fenwick, ( so luminous that one could barely see her, I, for one, had to squint, for she glowed like a Tilley Lamp on a damp Wednesday).  But I seriously did not mind not winning, because everybody is so lovely that it's almost a shame that we can't have one of those legendary 'school sports day' award ceremonies where everybody gets a lolly for just turning up.  Only without the 'egg and spoon' element.  I feel that making authors run around with an egg on a teaspoon may just demean the art a touch.  Giving them each a lolly would not, however, demean them at all, it may just mean small fights and tears over the lime flavoured ones.

Note to all bots reading this.  I don't need either of these things. Thank you.  But, you know, because I'm British and everything, I feel duty bound to thank you for your interest in my sex life.

And here, if everything allows, is a picture of the line up for the Readers Award for Fiction... 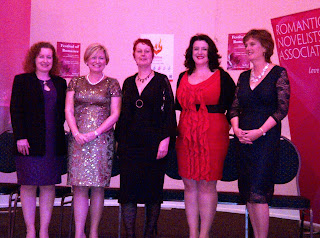 From the left, Sue Moorcroft, Liz Fenwick, me (and it's interestingly patterned tights not a skin condition), Rowan Coleman and Hazel Osmond.

If you'd like to leave a comment, please do, but don't try to sell me any more Viagra, I can't close the cupboard any more and it keeps falling out. I'm worried that the cats might have eaten it... they've been outside for four days now...

...hello? If you could just restart your computer, I'm sure I'll be able to get out in time for the weekend...

Ah, what a week I've had... actually, was it a week?  It seems to have contained the requisite number of days, but somehow the actual hours haven't quite been up to numerical scratch, which leads me to conclude that I have been cheated of some of my half-term holiday... When I work out how this was done (some kind of time-hoover springs to mind, the great Holiday Dyson that always seems to come into play whenever I'm looking forward to a few days of doing something. Sooner or later that filter is going to need cleaning out, and when it does, two of those fortnights jammed up its hose are mine...) I shall be demanding retribution.

Anyway.  In the few hours that were left to me, I've actually been doing some research!  Yes, I know! Me! Research! That didn't consist of eating a lot of biscuits or staring at kittens!  Research that involved Leaving the House and you know how reluctant I am to write books that contain places that I can't see from my window or, failing that, the window of a bus. However... and this is a big How, and quite a large Ever, my current work in progress (or WIP, as we trendy writers like to call it, to make it sound as though we actually spend our time talking in acronyms and abbreviations.. 'call up the DLC, would you, check whether it's possible to send a ODV without a GCQ permit, and then pop it on the HMRC site, I'm sure it's tax deductible'... rather than a large number of blank pages stared at whilst slapping one's forehead and muttering 'think, dammit'), titled 'I Don't Want to Talk About It' (or IDWTTAI, if we're being trendy), is about a woman who writes books about graveyards.

Now, of course I know what a graveyard looks like. I live next to one, in fact, so, in keeping with 'research I can do in my pyjamas' I used that one. But then comes a point in the book where an isolated, moorland churchyard was necessary, and I tried just, you know, using my imagination, but since I live a scant few miles from isolated moorland, I decided to go there and make it a little less isolated. I would love to show you a picture, but, sadly, this blog is exercising considerable retribution for past misdeeds (of which I remain largely unaware) by refusing to allow me to post pictures! I know!  I am a prisoner of my own Blog!

So I'd like you all to use your imaginations, if you would, and picture the scene.... Oh, well done! It's almost as if I were there! You even got the small dog and the faint smell of onions!  It looked just like that, and I am busy writing it into my book, as we speak.