The Writers' League for Anti-Procrastin... hang on, just need to clean the bath...

Before I get carried away...go and listen to my dulcet tones as I am interviewed by Morgen Bailey!  Yes, a chance to hear my lovely voice in Real Life, as I spread words of wisdom...well, it's more chat really, but you might pick up something useful. Go to the Google's Feedburner and my interview is listed there right at the bottom.  Go.  I'll wait here for you.  Honestly, you won't miss anything, I'll just hum and wander about and write my name in the dust til you get back....

Now, this may come as a bit of a shock, but I have discovered procrastination.  It's an evil little thing that makes you stop wanting to do the fun stuff, like writing, and instead brings a deep desire to hoover the stairs, scrub the oven or leave blatant and obvious comments on the statuses of people you have never met on Facebook.

You all know me.  You know that I regard housework to be the Invention of the Devil, that no-one ever died of a grubby shower curtain (except that one time and I still maintain that wasn't my fault, he shouldn't have been trying to lick the pattern off), and that any time spent in detailed dusting of bookshelves is time that could better have been spent doing ANYTHING ELSE, and yet...  Here I sit procrastinating by drawing up mental plans (that's 'mental' as in in my head, not as in bonkers.  Obviously) for devices to remove cobwebs without disturbing the spiders.  Not that I care about the spiders, as such, but I've always held that hoovering up the cobwebs when you can't see the spider that made them is just asking for an enormous eight-legged freak to come wandering home one day to find its web gone and then to start RAMPAGING around your house like some kind of DISPOSSESSED NUTJOB, and you've only got yourself to blame if it lands on your face in the night and you wake to find it sitting beside you on your PILLOW, grinning and rubbing its hands together as it plots your fate.  Or something. 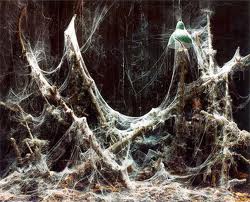 To you, this is messy.  To a spider, it's home.  Plus it's where it sits planning the best way to freak you out.

And all this because I should be writing.  I know I should.  I open up the document, re-read the stuff I did yesterday and then go and wash my flannel.

I have ideas.  I have whole lines of dialogue running through my head, causing me to mutter as I go about my daily tasks, like an old lady in the supermarket. I can see my characters, I know their motivations, their downfalls.  So why the hell would I rather painstakingly pick all the lint from the inside of my duvet cover than write anything?

There are cures.  One is to shout loudly at yourself (or, if you have staff, get them to shout at you).  Constantly reminding yourself that writing is not exactly rocket science (unless you are writing science fiction of course, in which case it probably is) and that you are privileged enough to have an indoor job with no heavy lifting, and that if you don't do it then your family may very well starve, or at least be forced to eat Lidl jam can work in some cases.  As can sitting in front of your computer writing any old rubbish until your brain is forced by your intellect to start making some kind of sense.  Nothing annoys an intellect faster than someone who insists on typing 'my blurgle ate my dog' over and over.


The third way is just to endure the infection until it works its way out of your system.  You won't get any writing done, but eventually you will have a sparkling clean house, a freezer full of home cooked food and your correspondence will be completely up to date.  You will, by now, be one hundred and five years old, but think of that lovely sparkly shower curtain! 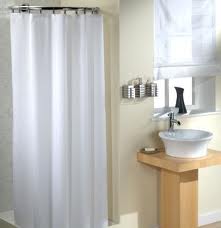 For those of you who can't be bothered, this is what a clean shower curtain looks like.  Yeah, apparently they're not meant to have all that yellow gunk all over them.  I was surprised too.

Right.  I'm off now to pick bits of fluff off the dog and read through some DIY manuals.  Might even wash my flannel again.
Posted by Jane Lovering at 13:09 7 comments:

Anyway. I'm here now.  So, what can I tell you?  This week is half-term, and I shall mostly be found sealed hermetically into my room with my laptop, finding new ways to avoid writing.  Chief among these will be my interview with Morgen Bailey, which will be podcast this week as Bailey's Writing Tips.  It's all right, I've managed to suppress my desire to have my hair cut again in honour of the event, I shall simply be wearing it swept back in an elegant style, and offset with a cocktail dress in simple velour (always assuming the new sofa covers arrive in time).  And pearls.  Obviously.  Because I am a Lady.

Well, not so much actual pearls, for although I am a Lady I find myself struck with impecunity (it's all right, I've got an ointment), and will have to mock up a pearl necklace using Blu-Tac and some marbles, but I shall look stunning nonetheless. 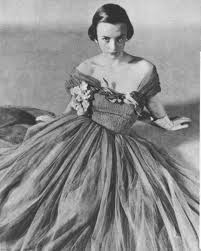 Like this, but with added Blu-Tac.  And snot.  And a less whimsical expression because, let's face it, she looks as though she's just now realising that she has inadvertently seated herself upon Jimmy Saville.  Which is a huge faux-pas in such circles.

In Other News, I also have to do my Tesco Shopping and assist my husband in his reorganisation of a briefcase which threatens to Overwhelm Us All. But it smells of new leather, which is curiously like the smell of fish, and oddly reassuring.  I also have to finish seeing off the last remnants of The Cold, which was unlike normal colds in its manner of attack - but I think half a pint of gin should do it.  And should also set me up nicely for the podcast too, although I shall do my utmost to avoid sitting on Jimmy Saville during the event. 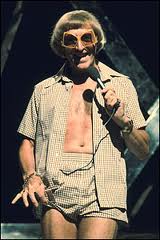 Being Allowed Out in Public in Unsuitable Underwear - A Survivor's Tale

I'm sure you'll all be delighted to hear that no-one was injured, I kept my clothes on and that the nearest we came to a fatality was when my smile threatened to knock a bookcase over.

Oh, sorry, didn't I say?  I'm talking about yesterday's book signing, in which I performed two parts, that of manic author, stuffed with E-numbers and wearing unsuitable underwear, and also that of responsible business woman, keen to press her latest novel onto members of the public.  I think I managed to carry it off.  Although there was one unsightly moment when I became confused, threatened to press my unsuitable underwear on a passing businessman and had to be restrained behind the Two For One offers desk.

Anyway.  For those who missed it, this is what I looked like. 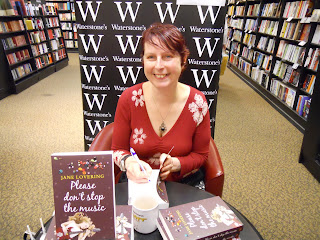 You can't see it, but there was a tin of Quality Street on the desk.  No, really, there was.  It only looks as though I'm sitting on it to prevent casual running thefts of the green triangles.  And don't stare at my cleavage for too long, you'll go blind.

This signing was undertaken (with the minimum of protective clothing) at the York branch of Waterstones, where they make unruly authors very nice cups of coffee and give them a really comfy chair.  I admit that I did forget to bring a pen, and entertained a brief idea of having to sign copies of my novel using my own spit and a soggy toffee-finger, but my lovely husband had thoughtfully shoved a biro into his pocket only that very morning, and I was able to write my name in the usual fashion.  Which, I think, may have disappointed some customers, but you can't have everything, can you.

And here's another one. 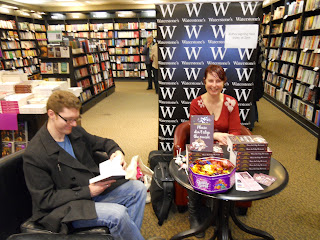 Just to prove the Quality Street thing.  And that there were actual customers in the shop, they didn't just pretend to let me in, whilst in reality closing the shop to real people.  There are two of them visible, probably plotting how to relieve me of my Strawberry Creams, although they may still be in shock, I fear I may have rushed up to them bearing bookmarks and incoherent gabble.  But at least my husband is smiling.

Corsets and PVC underwear - the authors' guide to book signings

That's right, I'm doing a book signing.  And no-one's getting out of that shop without a copy of Please Don't Stop the Music, even the ones who only wandered in to see if their copy of 'Accountancy without Tears (Except for the Client's, Obviously)' was in stock.  I've got the doors set to Emergency Lock, the Science Fiction section will be swarming with My Men, there will be Stormtroopers in the Children's department and I've got a plant in the Gardening section.  I think I'm good to go.

Of course, if I wear full camouflage gear no-one will be able to see me, so I'm going for the full Author look (which any writer will confirm consists of corset, kilt and clogs, it's almost a uniform in fact).  If this doesn't make me noticeable enough (and it might not, I can blend in you know.  I didn't spend years in MI5...no, actually, come to think of it, I didn't spend years in MI5) I shall be wearing underwear almost unparalleled in its oddness.  Which may mean that I can't sit down, but that's not a bad thing, right?  Who wants their authors sitting down anyway?  People want their authors to look dynamic, go-getting sort of people, you wouldn't want to buy a book from someone who looks like they sit around in comfortable underwear all day, would you?  NO. You would rather purchase from someone who looks as if they suffer for their art, someone for whom spiked underpants and a gusset made of nylon is merely the tip of the iceberg of discomfort. 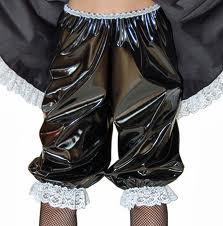 I'm not promising anything, just saying.
So, it's been a busy week, all in all.  What with Please Don't Stop the Music being released on Tuesday and then having to spend the rest of the week getting four Army units into position and training up my friends in hand to hand combat; buying really nasty underwear and finding clogs to fit...well, you can imagine.