I read back through some old posts on my blog the other day and it struck me that writing a blog is a little bit like writing a diary, only it's a diary that you hope other people are going to read.  Not like the one you wrote when you were fourteen, documenting every exchange, however slight, with that boy you fancied something rotten in 9C. Hopefully you've now looked back and realised that him tripping you up and laughing every time he saw you was not, in fact, a sign of deep love and was because he was an enormous bully.  And you only fancied him because he was the tallest boy in Year 9 and you could always see him in the corridors, six inches about the cloud of viruses that hovered around everyone's heads.

Now diary-writing has been replaced by blogging. We lay ourselves bare (in a manner of speaking, you wouldn't want to see me with my vest off) on the internet instead of between pages of 'narrow feint and margin' and those little photo-booth pictures that used to pepper the pages, where we posed with our BFFs with our tongues poking out and careful hairstyles to conceal the acne, have been replaced by pictures from our phones or plucked from elsewhere on the internet to illustrate our points. 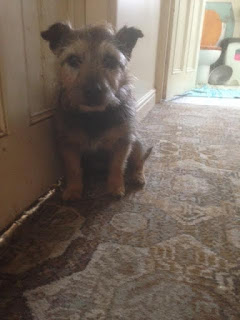 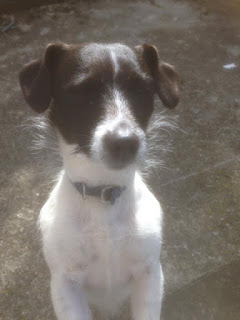 These are my BFFs. I'm not quite sure what point they illustrate, other than that having terriers drives you to madness and/or extreme fitness.

Anyway, dear blog... I have just splashed out and bought myself a ball to sit on.  A big, pink thing it is, designed to help my balance, so I'm sitting on it as I write this.  It's a bit like trying to blog whilst sitting on a small, restless pony, to be honest. It keeps shifting from side to side and it's only the nobbly bits on the top that stop me from sliding off. 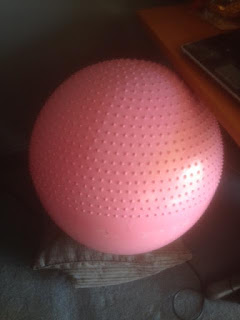 The observant among you may notice that it is resting on cushions. This is not because I am concerned for its comfort, nor to give me a softer landing should it shy dramatically to the left and throw me. No. The cushions are there because, in purchasing my ball, I neglected to ensure that when blown up and sat on, it would enable me to reach my keyboard.  I tried without the cushions, which resulted in me typing somewhere at shoulder level, like an infant trying to do the washing up.

However, I am assured that the ball, in conjunction with the terriers, should ensure that I end up with a bottom like two halves of a tennis ball, only less yellow and furry.  Dear Blog, I shall report back...

When you have a large book family...

Well, that's another book released into the wild.

You know that metaphor about books being like babies?  The 'nine months gestation and worrying that everyone will think it's ugly, and the big 'push' before it's released' and all that?  I've just found another one...
With your first baby/book, everyone gets terribly excited. You get lots of advice and then, once it's born, lots of sympathy when things don't quite go the way you expected.  People ask how it's doing, make 'ooh' and 'ahh' noises, send flowers and are generally very interested in the whole process.

When book/baby number two comes along, everyone is impressed that you felt you could do it all again, particularly with the fuss you made the first time, and the level of complaining.  But they admire your determination and, whilst they aren't popping round with flowers and home-made rice puddings any more, they enquire politely after your book/offspring, remember its birthday and give you a nice level of reassurance that it will all be all right and the first one won't be jealous.

By the time you get to book/baby number five (I only had five babies, so this possibly continues but I shall NOT be finding out), your announcement is greeted with groans, a level of 'oh, not another one, what do you want to keep doing that for', as though you personally wrote/got pregnant simply to annoy other people.  From number one, where everyone assured you that they would keep an eye out for it/buy it/come round straight away (only two of these apply equally to babies and books, try to work out which one doesn't), you now get a more lack-lustre 'well, if I'm passing and I like the look of it, I might try.'  However...

Little Teashop of Horrors is my eleventh published book and, I am delighted to say, its birth was greeted with just as much excitement as Book Number One.  It seems that the news of the pending arrival is met with less enthusiasm than the actual delivery, whereupon, like with babies, everyone overcomes their initial reluctance and discovers that, really, it doesn't matter whether it's first born or one of many, every single one is an individual with its own little personality. And cover.

Thank you to everyone who congratulated me on my new book baby. I'll take those home-made rice puddings now...
Posted by Jane Lovering at 11:12 No comments: